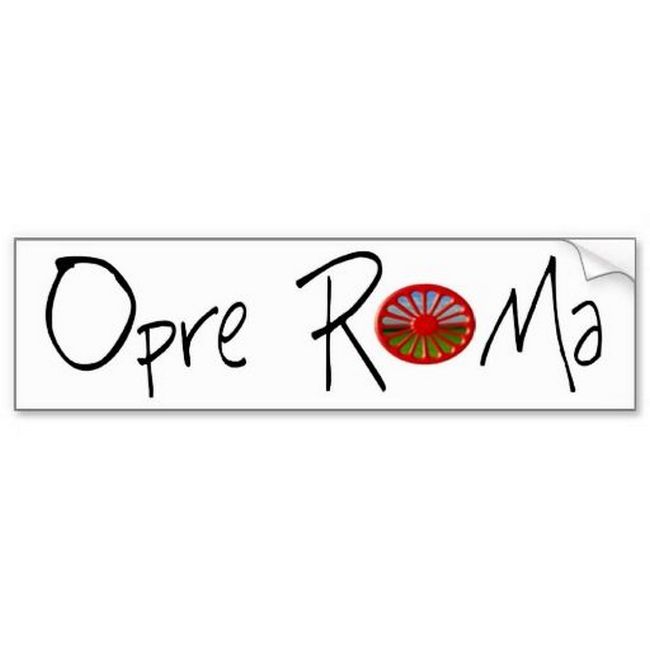 The absence of Roma’s state does not mean that they cannot have common, universally recognized symbols. They exist in order to integrate the representatives of different Roma groups living in different countries around the image of their nation. Also, it is paramount to the recognition and respect of the Roma people by other people.

The slogan “Opre Roma” or “Arise Roma” is recognizable to all members of the Roma community when it can be heard.

2. The Flag of the Romani People

The design of the Roma flag was defined and adopted in 1933 at the international conference “United Roma of Europe”, which was organized in Bucharest (Romania’s capital) by the General Association of the Roma of Romania. The initial flag design had two horizontal bars – the top bar was blue and the lower bar was green. The green color symbolizes the color of grass in the fields, fertility, and eternal terrestrial values. The blue represents the sky and eternal spiritual values.

In 1971, in London, the World Romani Congress adopted one common flag for the Roma people. Now, in addition to the two aforementioned color features, a new element called the “chakra” was added. The chakra looks like a red wheel with 16 spokes. It reminds the Roma of their Indian origin. The wheel in the center of the flag symbolizes constant movement and progress. 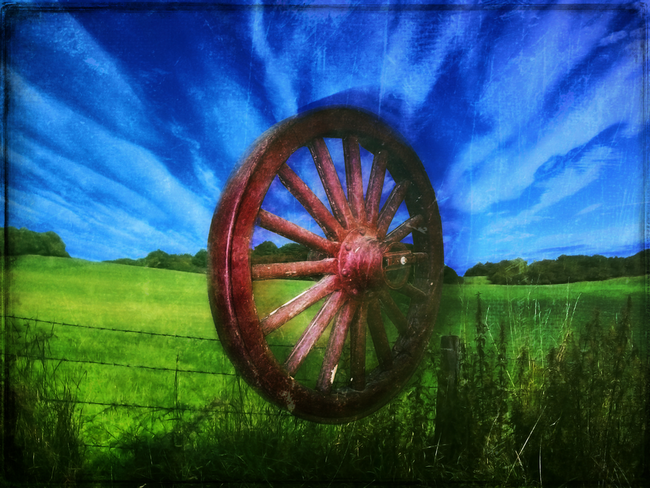 The Flag of the Romani People. Source

The “Chakra” appears in the center of the Roma flag and it is the official emblem of the Roma. It resembles the Hindu chakra. This logo was chosen deliberately in honor of the Indian heritage of Roma. The 16 spokes of the wheel decorate the flag and look like the wheel “Vardo” or “trailers”, which served as home to the traveling Roma families.

The Chakra wheel represents the whole life of the Roma. Interestingly, all the elements of the Roma flag are inter-related and propotionally placed. The Roma are on a path of growth in the physical and spiritual planes regarding life as a whole.

The color red represents”blood” that many Roma shed during the Second World War; and, also, for those Roma who suffered during the Genocide. It is kind of a reminder of the tragic events in the history of the Roma people.
Despite the conventional emblem for the Roma, the color of the wheel may vary by country or organization. The Chakra on the flag of the Roma movement in Croatia is golden instead of red. 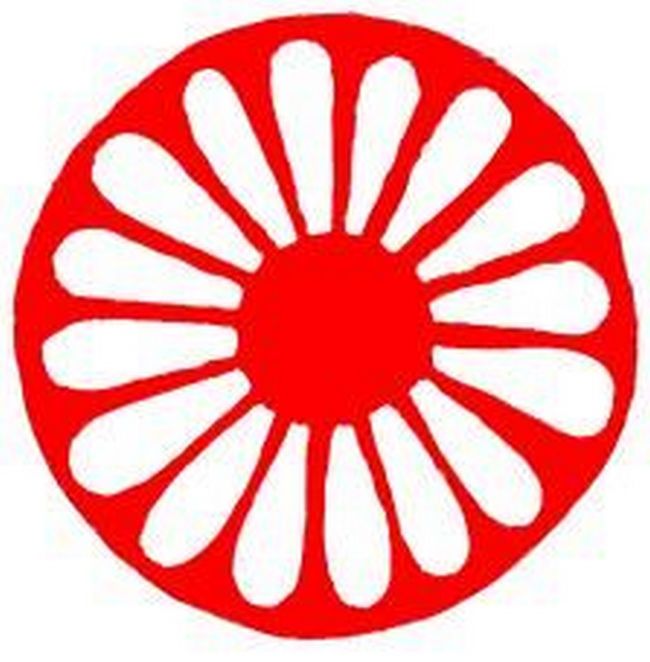 At the same congress, in 1971, the Romani anthem , was created. This anthem was based on the folk song “Gyelem, Gyelem” (authors of the lyrics were Yugoslav Rum and Zarko Jovanovic). Interestingly, there is no one set melody – each artist arranges a folk motif in their own way. For example, the Roma in Hungary still have their own particular version of the anthem.

English Translation by Dr. Rishi, from Romani language
I travelled, travelled long roads,
Everywhere meeting happy Gypsies.
Oh Gypsies, where do you come from?
With tents on this happy road?
Oh Gypsies,
Oh my Gypsy boys.
Once I had a great family,
But they were killed by the Black Legion;
Come with me, all Gypsies of the world,
Help swell the Gypsy roads.
Now is the time, rise up Gypsies,
We will rise high through action.
Oh Gypsies,
Oh my Gypsy boys.

As previoulsy mentioned, the World Romani Congress in London took place on 8 April, 1971. During the same year, in the same city, International Roma Union was established. A summary of what happened at the Congress is as follows: the Roma declared themselves as s nation without a territory, but with the national symbols; the flag and the anthem was adopted, which allowed the Roma to show self-determination through separate symbols.

But the Romani Day – is not only a feast for the Roma people. This holiday is for fans of Roma culture and for all of those who are interested in the Romani people. 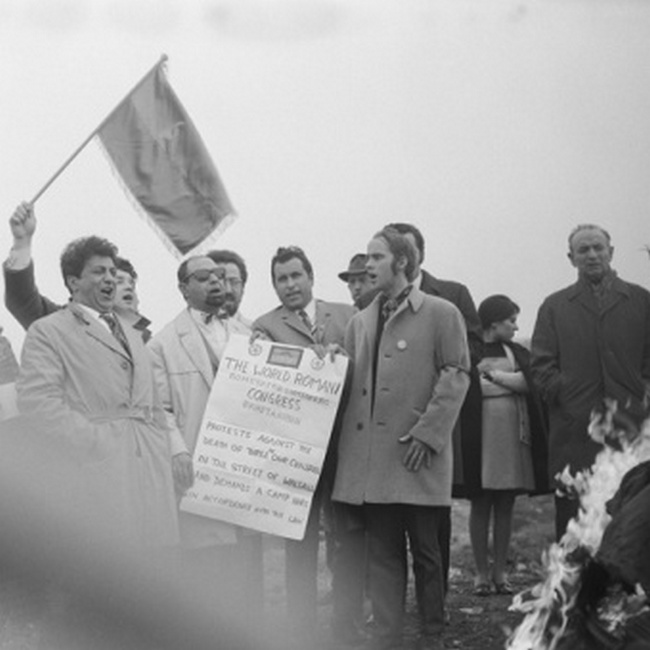 Celebrations, on the adoption of the Romani flag. 1971. Source

6.The Day of Remembrance of the Roma Genocide

It is debated that on August 3, 1944 in the Nazi Auschwitz concentration camp, a total of 2,898 Roma were killed in the gas chambers. That is why the International Day of Remembrance of the Genocide of the Roma dates back to August 2nd.Since 2004, Ukraine has respectfully observed this tragic day.

There is no consensus on the amount of victims of the genocide. The victim totals begin at 150,000 thousand and go up to 7 million people.

On this day, people all over Europe have mourning marches, photo exhibitions, and peaceful observances. Everyone is called to express solidarity with the tragedy that happened to the Roma. In order to prevent their recurrence in the future, ,the horrors of the past are never forgotten. 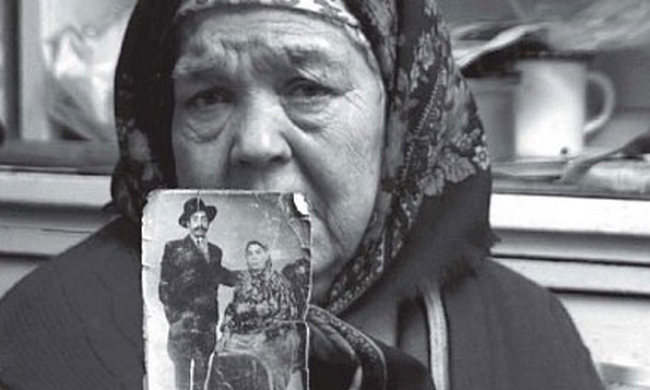 In the first week of October, there is a celebration of the days of Roma pride in European Union territories. Roma go through cities displaying posters and bringing attention to the problems they face.

The main purpose of this week is to combat all forms of discrimination of the Roma. This is clearly expressed in the inscriptions on the posters:

“Hatred is not a solution”
“Destroy the pigsty on a place Roma concentration camp in Lety” and others. 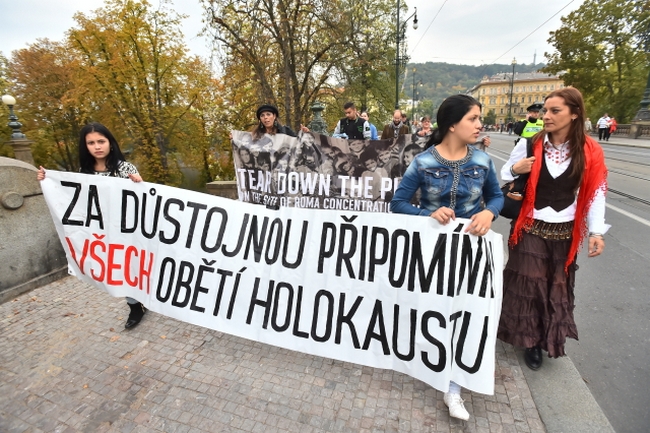 8. The International Day of Romani Language

For the first time the problem of the Romani language or “Romani chib” was raised at the same congress in London. There were thirty-eight participants in the session of the UNESCO General Assembly, which took place on November 2015. During this session, the Day of the Romani language was proclaimed as the 5th of November.

This is a very important step for consolidation and solidarity issues of Roma communities.

All the initiatives listed above are only a “drop in the sea”. In any event, we can continue to show respect for the Romani people and their history in both the present and in the future development of the entire Romani diaspora.