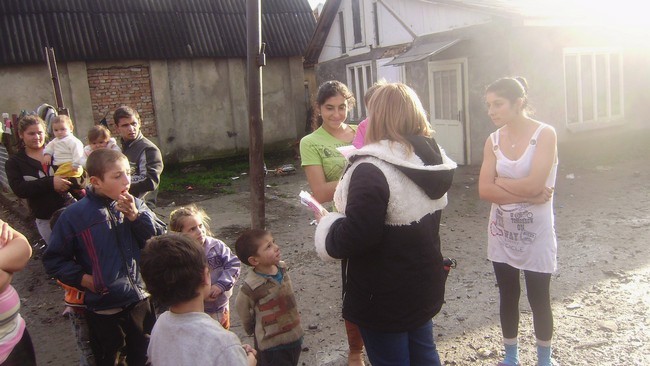 Probably no sociological or scientific study on the subject of integration of national minorities into Ukrainian society can be made without emphasis on the legal culture. Especially, very often that level is concerned, when it is about the members of the Roma minority. There is no doubt: up the fact that the integration of Roma into Ukrainian society is very slow, in 99% of cases the answer is simple – its Roma’s fault. Because, in particular, Roma do not want, they say, to improve their legal awareness and culture.

This view is partly true. But those, who think like that, are consciously or unconsciously shifting focus, simplifying and making the issue too narrow. For that is just one reason. The reason is the low legal culture of Roma – permanently repeated in hundreds of publications, an argument in the discussions and before our eyes formed in the already quite stable stereotype: Roma are illiterate, do not know the laws, they refuse to perform their duties and cannot protect their rights. Let’s think, is that case so simple?

The Transcarpathian region is known as multinational region. We can give a very good picture for comparison. When Hungarian from Beregovo City cannot fill out a simple document in the management of social protection or passport, no one says that he has a low level of legal education. It is also not mentioned when Romanian from Tiachiv City gives a bribe to get him some appropriate, according to the law, benefits or payments, or simply any administrative services in any state structure or organization. We are not talking about the low level of legal education about the Transcarpathian Ukrainians, ordinary villagers who are often afraid of officials and they cannot fill in the papers because they do not know how to do it. However, if a similar situation happens to the Roma ethnic group – you can always hear a replica about legal culture and education, which they lack.

We can make the obvious conclusion: in our society, the level of legal culture in general is very low, but usually problem is accentuated only by the example of members of the Roma community. But why is it so?

By definition, the legal culture includes knowledge of the law, the conviction of the need and usefulness of social laws and regulations, the ability to use legal instruments – laws and regulations in practice. Generally this is a kind of common culture, a set of factors that characterize the level of consciousness, relationships, perfection of legislation, organization of compliance, the state of law and order.

An important point: of course, low level of education stands in the way of understanding the legislation for Roma and the use of legal instruments. This is the root cause of the problem. And the most important factor that forms the above stereotype of the legal barbarism of Roma. The man who cannot read and write is automatically perceived by society as uncultured. Though it’s the quite controversial if you can so easily put equal sign between illiteracy and lack of culture.

A prerequisite for the proper level of legal culture, both for each person and the whole society is the provision of Art. 57 of the Constitution of Ukraine “Everyone has the right to know their rights and duties”. That every citizen should know what rights he has, as these rights are protected, where to go and most importantly, must demand the protection of these rights. But there is one thing: people are not required to thoroughly know the laws and regulations; it is enough to know their constitutional rights and methods of their implementation.

Ukrainian law says that citizens belonging to national minorities are free to choose the amount and form of rights, which they are want to realize and which are granted by the law and carry them out personally through corresponding state bodies and established public associations. The last words are important: the staff of public authorities must fully and equally in time (in other words – qualitatively) provide services to all: Ukrainians, Russians, Hungarians or Roma. And no matter, if a person, who applied for the service, can write or not. And no matter what is the color of his skin. Instead, there are known cases of discriminatory treatment to the Roma by Transcarpathian civil officials (including, for example, police officers and doctors).

We must realize, the legal culture is independent from the law, and any law cannot raise its level by declaring separate rules. The legal culture does not appear from the documents – it cannot be there; legal culture is created from life. The process of its formation is characterized by the creation of specific cultural and legal values, formed by a national time-spatial reality.

What can we do to improve the cultural status of the Roma minority? The answer is to determine the values and ideology create and then bring legislation in line with the last and begin the long process of educating people.
As the people so the culture; as the culture so the state; as the state do the life. Today it seems that the government is not interested in raising awareness of the content of the processes taking place in society, so one probably should not expect from it actions designed to promote the development of culture, consciousness, legal awareness of citizens. There remains hope for kindergarten teachers, school teachers, and what is very important – for public organizations.

For example, in the Transcarpathian region is successfully working the Mukachevo Human Rights Center, which mostly helps the local Roma community. People who apply to our Center, have no information about what governmental bodies would help them to solve their own problems. On the other hand, the approach of government officials is based on formal matters, and not on the practical help to a person. Especially in the case of the members of the Roma community.

The lawyers of the Mukachevo Human Rights Center state: “Our experience shows that for poor people it is very hard to search for information, especially concerning laws and regulations. People do not understand the terms and require a comprehensive explanation of the law. Also, equally significant problem is the fact that people are afraid and do not want to apply to the courts and the police to solve their own problems because they do not believe that they will help them to solve them”. These words confirm the view expressed above that the legal culture of society as a whole is impossible without legal culture of officials, police officers, doctors or judges.
Legal culture will develop automatically. This conclusion can also be referred to the problem of legal culture of the Roma, they should not thoroughly know the laws, but they have constitutional rights and should know to whom to turn to protect them. And most importantly – those to whom they appeal should listen to them and remember about their own legal culture.