Died? So What? For Eleven Years the Officials Do Not Want to Admit Dead the Roma Woman, Who Was Burned at the Landfill 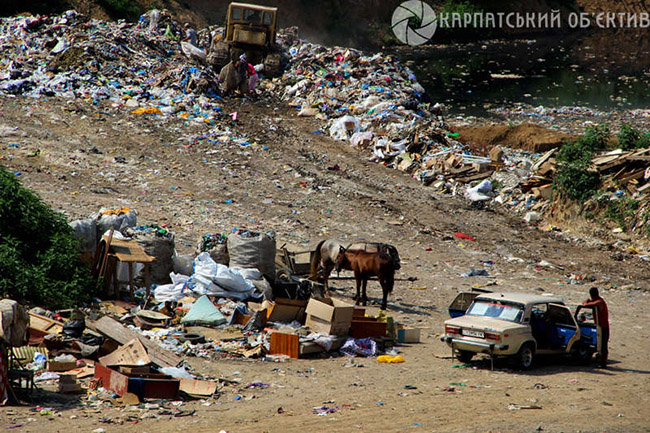 Sometimes, the indifference of officials in all matters concerning the Roma gets really bizarre. We are repeatedly told, as by the human factor in government agencies and local government Roma were denied the simplest services, which violate their basic rights. This may be the issues of the child care, education, medical services and so on. A huge problem is related to lack of documents. Roma cannot get documents about their homes, jobs. A bunch of trouble with registration documents, when people are simply refused to be issued a “paper” to confirm that they are alive, in fact refused to be recognized as living people.

In the history which we describe below, the situation is vice versa. The long ago dead person is refused to be admitted… dead.

Elvira Gajosh, born in 1960, in 2004 went in search of something for living to the local landfill in Ivano-Frankivsk. And then she disappeared. Since then neither her husband, nor their daughters have any news from her. Roma, who worked at the landfill along with the woman, told the family that she died because of the fire. However, this case is not officially recorded. Although the disappearance of the woman and her probable death was reported to the police. Police gave no information on the fate of the woman.

For the family of Elvira Gajosh, this tragic story received an unpleasant sequel. Until now, her husband Leonid cannot register the death of his wife in the department of registry office for the termination of marriage with her. And it makes trouble in many areas of their lives.

With his challenge Leonid applied to the Mukachevo Human Rights Center, which decided to tackle his problems.
First, we had to look into the laws to see what the legislation of Ukraine says about the incident. As required by article 46 of the Civil Code of Ukraine, natural person may be declared dead by the court if at the place of their residence there is no information about their place of residence for three years, and if it has disappeared under circumstances threatening death or giving the reason to concede their death from some accident – within six months.
A natural person is declared dead from the date of entry into force of the court decision about it. An individual who disappeared under circumstances threatening death or suggesting the death from a specific accident or due to military actions can be declared dead on the day of their eventual death.

Since the disappearance of Elvira Gajosh has passed about eleven years. Since 2004, she did not give any news about herself, did not call, did not write, or interested in the family. According to these circumstances, there is reason to concede her death, so the court should declare Gajosh Elvira dead in accordance with CPC art.art.246-250 Ukraine.

According to the part 1, Art 17 of the Law of Ukraine “On state registration of civil status” state registration of death is conducted by the state civil registration on the basis of:
1) The prescribed form document admitting the death issued by the health care institution or forensic medical institution;
2) A court decision establishing the fact of a death of a person at some time or declaring them dead.
The lawyers of the Mukachevo Human Rights Center emphasize that basis to declare a person dead are not the facts definitely confirming her death, but the circumstances that give reason to concede a person’s death. Therefore, the court decision to declare a person dead must be distinguished from a court decision about the fact of a death of a person. In contrast, the fact that she is dead is a trusted fact.

Based on the above, lawyers have prepared an application to the court to declare Elvira Gajosh dead.

We do not want to run forward, but dare to suggest that the court recognizes the woman dead and her husband will be able to correct his status. The case is quite clear. There were witnesses of her death. Therefore, it is regrettable that such a simple case cannot be closed by the officials without the intervention of human rights activists and adjudication. And not because they cannot do it or do not know how. The main obstacle is indifference. So what if some Roma died 11 years ago, or through legally uncertainness her living husband has a lot of problems? These are Roma. And who need them with their problems at all?

Unfortunately, reproaching Roma for their antisocial lifestyle, these officials do not even notice that they themselves have acted inhumanly.

Based on the materials of the Charitable Fund “Progress”
Photo: Carpathian lens