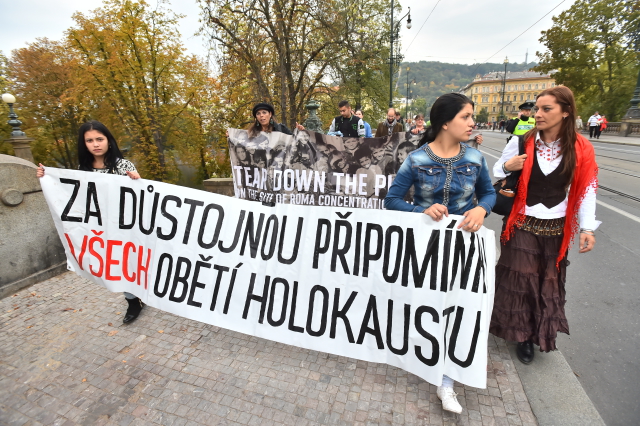 The parade of Roma pride in Prague

On Sunday, October 4th, the Parade of Roma Pride was held on the streets of Prague; it gathered around 50 people. The participants of the parade were carrying in hands posters with different slogans, such as:

“Hatred is not a solution”
“Destroy pigsty at the place of the Roma concentration camp in Letah” and others.

The Parade of Roma Pride or Roma Pride once again was held on the territory of the European Union, or rather in 13 European cities. During the last two years, Kyiv is also involved in this parade. However, the principle of celebration differs.

The purpose of the parade is to maximize the appeal to public attention to the traditions and culture of the Roma people.

For many decades there is complete alienation, rejection, discrimination and abuse directed to Roma people. Not so long ago, the concept was introduced to summarize all the above as the phobia of Roma.

It was found that one of the causes of this phenomenon is the traditional isolation of the people in urban areas with compact residence. Only those who have visited the camp may say, how in fact the Roma live. And for those who have not visited it, and, moreover, feared and hated them, aforementioned Parade is a great opportunity to see how rich and colorful culture of Roma people.

Undoubtedly, this parade shows not only the positive aspects of the community, but it is also the factor of solidarity. It is known that Romani people do not have their own state. Therefore, it is important to extend this tradition, in the second week of October, not only to share cultural experiences, but also to feel as a part of a great nation.

The press-center of the Charitable fund “Progress”