The Monument, which has Split Mukachevo 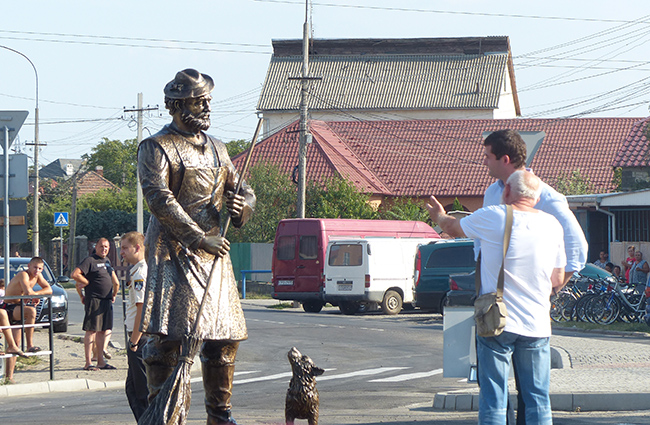 The media reported recently that in Mukachevo, with the largest Roma community in Ukraine (more seven thousand people) – has been established a considerable size monument to Roma-janitor. And the appearance of Roma, presented there, is very stereotyped – beard, hat, apron, broom and dog nearby. Apparently, the monument is not cheap.

It would be easy to say – yes, indeed, this is an important moment for the Roma community of the city. But…
There are facts about all “no” and “but” built into this monument, about them we were informed from representatives of NGOs, who protect the interests of Roma communities.

“The first thing I want to draw attention to – is that in the camp, that is home to seven thousand people, there is no water, – so began the conversation with Vice President of International Roma Women Charitable Fund Chiricli Zemfira Condur. – All negotiations conducted by local NGOs with the mayor of the Mukachevo on this topic have failed.

Why? The mayor believes that because the Roma have no work, they will not pay for utilities. So, what’s the point then to supply the water? The head of the city repeatedly states it in private conversations and in public meetings, which were held on this issue.”

In the camp, among other things, there is no road, no area equipped, and most of its inhabitants live in houses, that they built by themselves, which can hardly be legitimized. These premises do not meet basic safety standards.
And, on the background of total poverty among residents of camps, lack of education and people that cannot count on any other work except the janitor one – a monument set! Note that all this is happening on the eve of local elections.

Public reaction was instantaneous. On the next day, local activists representing and protecting the interests of Roma communities have initiated action, flash mob, which have expressed their opposition to the monument.

In social networks, representatives of Roma communities from different regions of Ukraine put their “non-stereotypes” photo in official clothes with a broom in his hand. Photos were accompanied by comments: occupation and reaction-quote on the appearance of the monument.

The action was supported by Roma lawyers, public and cultural figures, interpreters, social workers, doctors, university students and others.

This monument is widely regarded as the root of the negative stereotype to Roma people. In this case – as an illustration of the fact that these people cannot get the other professions and everything that is left for them is to sweep the streets.

The next steps from activists – appeal to the mayor of the current city.

After all, the money spent on this monument, we can call wasted. That money could go even to repair roads in the settlement.

Mykola Iurchenko, head of the Roma organization “Ternipe” in Lviv, expressed his opinion about the monument:

“My first impression of this monument was shock. What is a monument at all? It is embodiment of something worthy and kind of respect to our history memory. For example, monuments for miners or farmers – are usually a sculpture without national characteristics.

Of course, every job is respected. But connecting occupation and nationality – it is, from my point of view, discrimination. This is disturbing a lot, because the creation of this, dubious from all points of view, monument was initiated by local deputies, representatives of the Ukrainian people in power!”

The representative of Transcarpathia, Aladar Pap, the head of the cultural organization “Rom Som” says about the monument: “The result is a mockery of the people – like Roma are only janitors. For over 20 years of my work in the field of protecting the Roma rights I have seen everything – but I never felt humiliation like this”

Representatives of the Expert Coalition of Roma organizations in Ukraine found that the city authorities of Mukachevo didn’t asked opinion of the local Roma on whether they need a monument.

Roma represent a significant portion of the population in Mukachevo. But the inability of the authorities to engage in dialogue with people as a result leads to the fact that “We tried our best …” – and then you know.

The problem of communication between Roma and local authorities is traditional for Ukraine. One of the solution is a implementing the program on social mediators. In Mukachevo there is one mediator. The government is aware of his activities – but, for some reason, they hadn’t the idea to consult on the feasibility of the establishment of the monument.

To say that the monument – a symbol of traditional Roma professions, as local officials claimed at the opening ceremony of the monument – is unacceptable.

There are two ways out of this situation, which can be provided:

Either local authorities should officially announce that the monument is not connected with Roma – and just a monument for janitors, as a kind of tribute to people who are busy on cleaning streets, but without the mention of nationality.

Or the second option – a monument should be dismantled because it does not meet any criteria or understanding tolerance and good neighborliness. And, moreover, symbolizes the root of negative stereotypes about Roma.

According to Olga Zhmurko, the Roma Program Initiative Director of the International “Renaissance” Foundation, the monument in Mukachevo is immortalized in metal stereotype of Roma.

The argument in favour of the fact that it is now the Roma who sweep streets is beneath criticism. First, let’s think why these people can not apply for another job? Do they have full access to education? Can their families give children at least minimal social and economic opportunities?

In addition, this monument simply eliminates the effort and contribution to the development of Roma communities of the Roma people, who have or are getting education (today only scholars and graduates of the Roma Education Fund in Ukraine are more than 300 people), who with their example try fighting discrimination and prejudices about their people.

Expert coalition of Roma organizations “Strategy 2020” states:
The efforts of local authorities in Mukachevo should be directed to specific aid to residents who live isolated in inhuman conditions and deprived of basic goods – but not for the erection of such monuments with questionable cultural and artistic value and, moreover, that perpetuate negative stereotypes.