The Path of Despair: In Which Doors to Knock? 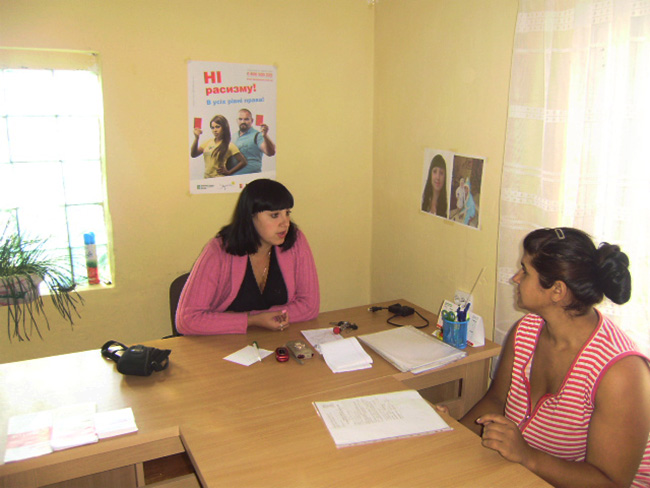 Residents of the Roma settlement, which is located in Mukachevo, Olesia Kirsh (name changed to protect the privacy) and her daughter Solomia, caught in a vicious circle to get out from which a lawyer of the Mukachevo Human Rights Center Iryna Lysnychka helped.

Within two years, they cannot obtain from the registry office identification documents. The workers of registry office did not register the child’s birth even after the decision of the Mukachevo court! And they do not care that they are breaking the fundamental law of Ukraine – the Constitution. After all, it is pointed out that the constitutional rights and freedoms of person and citizen may not be restricted.

However, rights and freedoms of Roma girl have been violated fully. This is not the first time that representatives of the Roma community apply to our center with the problem concerning a dialogue with the registry office or the court. And always, we manage to get identification documents. Although we also had experience, when workers of registry office refused to carry out the court’s decision, guided by their internal regulations and rules.

However, this situation is different from the previous ones. Just imagine, for 2 years, mother and daughter have been trying to go through the process of obtaining the identification documents. For two long years, they have paved their own path, haunting thresholds of the registry office and the court. And here’s the thing.

Starting 2013, Olesia and her daughter Solomia, appealed to the Mukachevo registry office on the issuance of a birth certificate for her daughter. But employees of the office sent the plaintiffs to the court, which had to establish the fact of the girl’s birth. However, the court stated that the there is no reason for the establishment of the legal fact, as a resident of Roma settlement have a document, according to which, the registry office have to registers the birth of a girl.

In fact, her mother does have a document, according to which, the registrar may register the birth of a child, namely – a medical certificate of birth. Olesia and Solomia, delighted at the news, went to the registry office with a new package of documents, adding to it the court’s decision.

The mother and the daughter have already run for 2 years, receiving refusals everywhere and the direction to the court registrar, and to the registry office. “How long can we tolerate these abuses from the authorities? Constant failures, running, a lot of papers. We have already spent about 5,000 hryvnia. No material resources or moral strength have left. I was just desperate and do not know when it’s all finished “, – exhausted Olesia said, hugging her tired daughter. And what is in the conclusion? Damaged nerves, spent money, lost time, unrealized rights and freedoms.

Now imagine that to this is added discriminative attitude to the Roma community, the fear of public institutions and speaking different languages. Fortunately, the girl and her mother appealed to our Mukachevo Human Rights Center, which helped with this type of cases not for the first time.

Iryna Lysnychka explained that there are a number of gaps in the legislation that prevent from receiving identification documents in a simplified way, and create the conflict in law. They should be eliminated, which will help to avoid any double interpretation of legal norms. However, in terms of actions that the registry office made, and their desire to register the birth of a girl, you need to go other, mandatory way. Therefore, together with the lawyer of Mukachevo Human Rights Center, Olesia and Solomia prepared a statement of claim to the Transcarpathian Regional Administrative Court on the recognition of wrongful acts of registry office.
The court ordered the registry to register the birth of the girl, and issue a birth certificate.
We hope that the workers of the registry office comply with the decision of the Regional Court, and, in the end, Roma girl will receive her identification documents, which will help her to fully function as a citizen of Ukraine.
It is unacceptable that one norm of the law was interpreted in different ways. This, as we see, does not lead to positive results. The law must be simple and clear, not only for public authorities, lawyers, but also for every citizen.
The press centre of the Charitable Fund “Progress”
PS: The centers of legal information and advice that provide free legal aid to Roma people working with the support of the “Roma of Ukraine“, International “Renaissance” Foundation. To learn more about the activities of a network of centers, foundations and principles of work visit the website www.legalspace.org under “Legal Empowerment of Roma communities.” The views in this article are those of the authors and do not necessarily reflect the opinion of the International “Renaissance” Foundation and other civil, religious and political organizations and individuals.