Monitoring the Level of Education of the Roma Children in Mukachevo

Today, on October 11th , 2013, the International Day of the Girl Child is celebrated. It was proclaimed by the UN last year for the first time. This day is intended to draw the world’s attention to the problems faced by young girls, to the problems directly related to their belonging to the female sex.

One of the main problems is the lack of education. In the poorest countries, this is due to early marriages, girls are deprived of the opportunity to attend school and receive a full education.

Also, serious social problems are the lack of adequate nutrition, adequate medical care, lack of knowledge about their rights, domestic violence and discrimination, and most importantly – forced marriage in childhood!

The well-known fact is that the availability of education for children in closed ethnic groups leads to a reduction in the number of early marriages and childbearing at an early age. 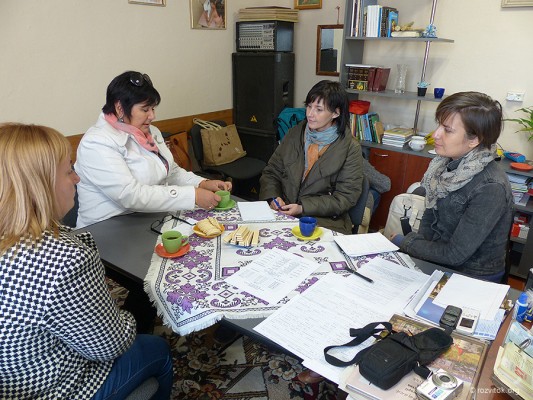 Ukraine is not a poor country, but we are like anyone else close to this problem. In Transcarpathian region, there is one of the most isolated ethnic groups – the Roma. Their traditions and lifestyle lead to the same disastrous results. First, the lack of elementary basic education of the representatives of the Roma population leads to a complete social and legal insecurity that eventually becomes the main problem of unemployment and poverty among the Roma. The second, no less serious problem – it is the alleged fear of losing cultural self-identity and breaking the traditions that lead to early marriages and, eventually, become the main cause of the disintegration of the Roma population for centuries.

Educated girls, even at the high school level – is a powerful force, both for the girls and for society. Education is the only thing that can destroy the prevailing social stereotypes and violent tradition.

Education, education and again education – that is the basis of the standard of living of any person, regardless of their social or ethnic origin.

In early October, 2013, the lawyers of our fund together with Corina Azhder, representative of the European Roma Rights Centre (Budapest) made a monitoring visit to Roma and Hungarian schools in the Mukachevo city in Transcarpathian region.

The main purpose of the monitoring was to obtain reliable information on the following issues:
1. Has the goal of the educational process been achieved?
2. Is there a positive trend in the development of students?
3. What is the trend of attending school by Roma children in the winter?
4. Is the amount of teaching material matches the quality and level of education of schoolchildren.
5. The organization of educational process in the classroom, the forms and methods of educational activity.
6. Equal opportunities for learning for Ukrainian and Roma children.
7. Search for the causes of illiteracy of the Roma children.

According to the monitoring results, we can draw the following conclusions.
In contrast to the Hungarian school number 3 in the Roma school number 14, many children receive education of such a poor quality, that after school they do not have elementary basic skills – can neither write nor read.

At the same time, the school gives all opportunities for study – pure heated classes, professional teachers, technical support, there are even computer classes. But the problem is that children do not want to go to school. From the first to third class attendance is almost 100%, but starting from 10-11 years, traditions come into force and children no longer attend school. Parents lose control of them and do not pay any attention to the education of their children.

Serious problems in school begin usually in 5-6 class. Attendance tends to zero. The level of knowledge that children have got by the third grade, reduces sharply and everything goes back to the beginning – to the alphabet.

According to the director of the Roma school, starting from 6 – 7th grade girls come to school already pregnant, and, of course, it is not a studying process. The earliest case of pregnancy was in the third grade (she was only 12 years old).

It is believed that the main obstacles for Roma children to receive a decent education are: poverty, social isolation, language and ethnic differences. But let’s look at the situation from the other side and try to find out the root causes of illiteracy of the majority of Roma children.

1. In Mukachevo there are Roma and Hungarian schools where there are teachers, books, and equipment.
2. Hungary every year allocates to each student in these schools an average of 800 hryvnia for the purchase of necessary items to start of study (books, notebooks, pens, etc.).
3. The exclusion of children in the matter of access to education cannot be considered. Roma school is located almost in the center of the camp, and it takes each child less than 5 minutes to walk to the school.
4. Hungarian language is not a problem. Mukachevo Roma speak Hungarian, and the teaching in the Roma and Hungarian schools is in Hungarian.

The Roma children learn the Ukrainian language three hours per week. At school they also study French and Russian. Now, the law came out, that this year in all schools is compulsory teaching of two foreign languages. The Hungarian Government has proposed to conduct a pilot program in the Carpathian region, where instead of the mandatory second foreign language to increase the number of hours of studying the state Ukrainian language! It will give an opportunity for Romani children to better and faster learn the language of the state, in which they live, and will live on, the language in which they can study at institutions of higher education, and then work.

If the parents never studied, so the children will never do it. Parents cannot share with their children such a positive experience. Accordingly, uneducated parents can raise children just uneducated. It is necessary to carry out an enhanced and targeted work to explain the importance of education for Roma.

The experience of our fund, which included the holing of the socio-legal workshops for the Roma, showed that the positive trend already started in systematic changes in the Romani camp. This year, in the framework of the project “Strengthening the legal capacity of Roma communities“, which is funded by the IF “Renaissance” the lawyers of “Mukachevo Human Rights Center” will continue to conduct various activities to raise the level of legal awareness and legal culture of the Roma, which will lead eventually to a deeper social integration of the Roma in the Ukrainian society.

More photo in our gallery.