The Roma Court. Part I (The Story of the Roma) 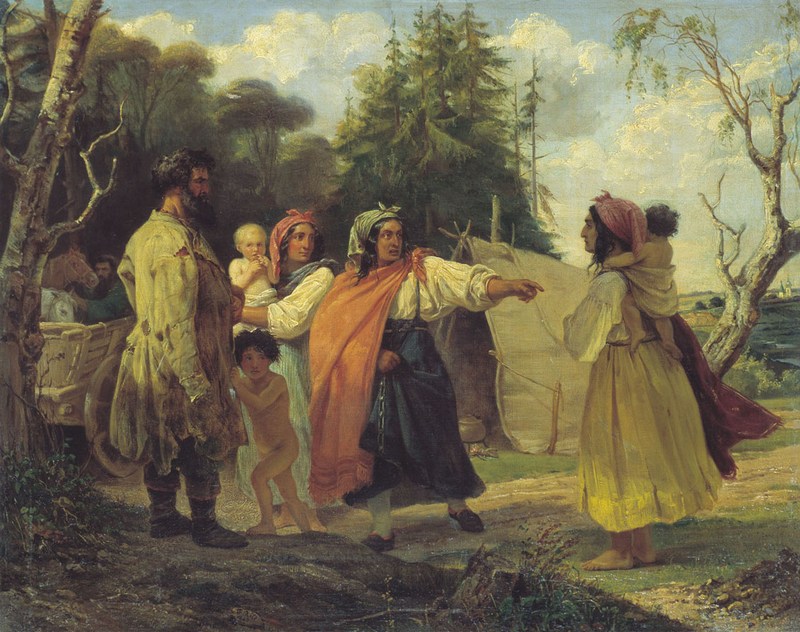 The Roma settlement in the forest, 1842. Franc Riss, the Russian artist. Source

The most common designation for the Roma court is kris (i.e. court in Romanes). The designation kris is characteristic mainly for Roma groups of the Kelderari (Kăldărari, Kalderaš and so on) and the Lovari / Lovara not only in the regions in question, but also in many other countries in the world. The Kelderari and the Lovari nowadays live in Romania (mainly in Transylvania), Hungary, Slovakia, the Czech Republic, Poland, in the countries of the former USSR (mainly in the Russian Federation, and also in Ukraine, Belarus, Latvia and Lithuania), and in the former Yugoslavia (specifically in Serbia, as well as some Lovari in Croatia). The term kris is also used by their closely related groups or (more or less) separated subgroup divisions, for instance Čurari, Posotari, Kherari, Khangljari, Colari, Drizari, Mašari, Cerhara and others in Hungary, as well asBougešti, Drizari and others in Slovakia and the Czech Republic (who are usually known to researchers collectively asLovari). In the last few decades large parts of these groups (mainly from the former Yugoslavia) have migrated to different countries in western Europe, as for instance Kalderaš in Austria, Lovari and Khajnjara in Italy and so on.

In Bulgaria among a segmented community referred to by the general name Kardaraši / Kaldaraši (the self-appellation Řom Ciganjakmeans “the true, the proper Gypsies”), the term used is mešere or mešare or mešarjava, and more rarely (in north-eastern Bulgaria) the terms žudikate or dalavjara are also used. Among communities closely related to them who are frequently called Lâješi or Čori (the self-appellation is Řom Ciganjak) in the Romanian region of Dobrudzha, the term žudikate is used. The term žudikate is also used by a segmented community, known in what is today the Republic of Moldova under the general name Lejaši (the self-appellation Řom Ciganjak is also used) who are referred to as Katunarja in Bessarabia and in southern Moldova, as Čokenarja in northern Moldova and as Kišinjovci in Russia and Ukraine (after migrating there). In a number of cases among the different Roma groups on the territory of what is today Romania where a Roma court exists (for example, Kazandži, Džambaša, Zlatara, Aržentari, Korbeni, Karamidari and others, often known under the umbrella terms ofPletoši, Lâješi or Kortorari) the designations žudikatе and kris are used as doublet forms. Along with this a certain territorial division exists when using these two designations – in Wallachia and Moldova žudikate is used more often, while in Transylvania (even among the same groups) the situation is exactly the opposite, as the usage of the term kris prevails. Sometimes the designation divano is met, used as the second or third term among different groups, as well as the termstabor. The latter is used in some places in Transylvania in the more general sense of community meeting.

In the countries of the former USSR, kris is used only by Kelderari and Lovari, and žudikatе is used only by Kišinjovci. Regarding the Ruska Roma, a group widely spread throughout the entire former Soviet Union, the term most commonly used is sendo / syndo. The same terms are used by Servi in Ukraine and Russia, as well as by the Vlaxi and Plaščuni in southern Russia and eastern Ukraine. Today, among various Roma groups that have settled in the countries of the former Soviet Union the terms syndo or sudo are gaining ground, as are the terms sxodka and razborka. 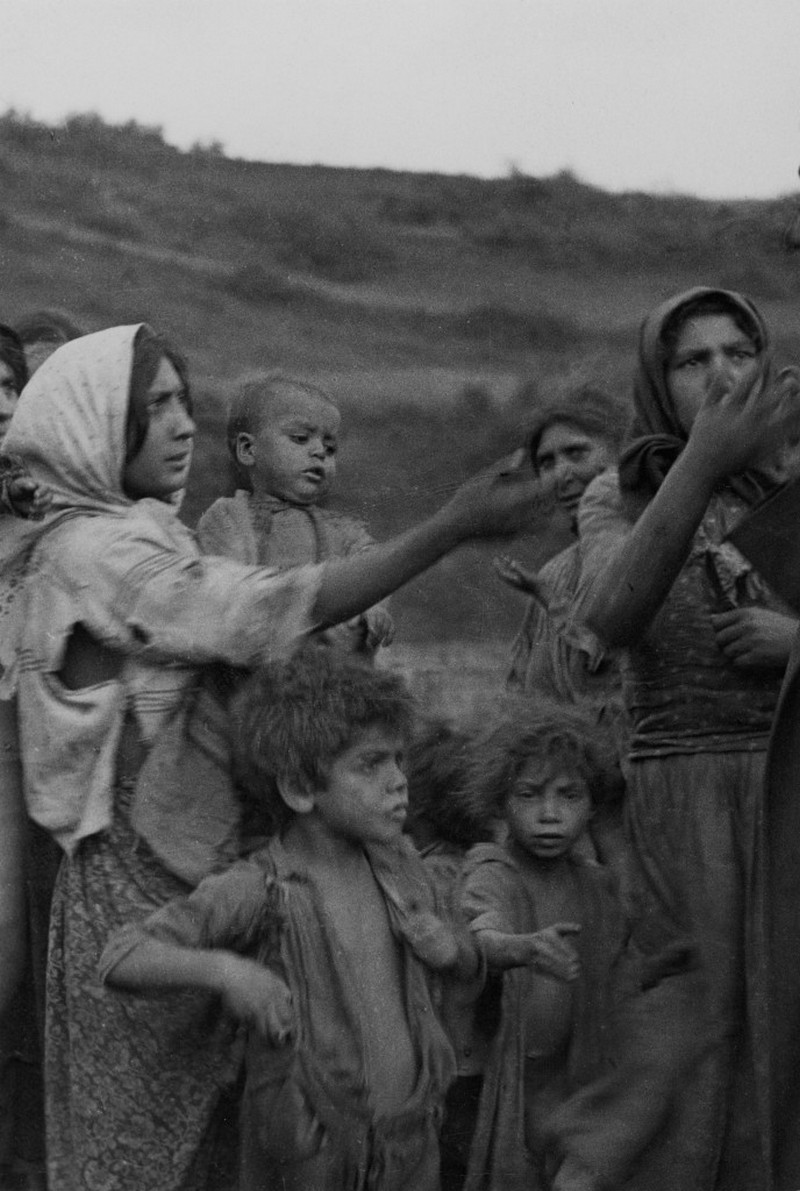 Essential haracteristics of the Roma court

This basic conceptual idea which predetermined the form and manner of how the Roma court functions is above all the concept of consensus. Every ruling of this court would not only have been adopted unanimously by the members of the court, but by the entire community as well (including the defendants). If a consensus were lacking, the very institution of the Roma court could not exist, as no other mechanism exists which could carry out its rulings. The presence of the common, basic conceptual idea of consensus also predetermined the similarity of the numerous Roma courts, and as a result only slight differences have occurred in its forms and its manner of functioning among the different Roma groups.

The number of judges is not fixed, but depends on the complexity of the case, and the number of judges can be increased or reduced. Various figures are known, from a minimum of three, most often 11-15, to a maximum of 21-25 persons. The larger courts, however, belong more to the past, and the trend today is to keep the number of judges participating low. The composition of the court is determined in a similar way by the different Roma groups. The plaintiff announces that he will “gather the people” i.e. “a court hearing” is called. Respected people who are to resolve the issue are invited, and the person being called before the court is notified. The defendant also has the right to invite other respected people. Today this tradition in Bulgaria and in Romania has seen some formalisation, nevertheless it still functions in the spirit of consensus – both parties agree to invite the same number of people, and an agreement by both parties is reached on the odd member of the court. 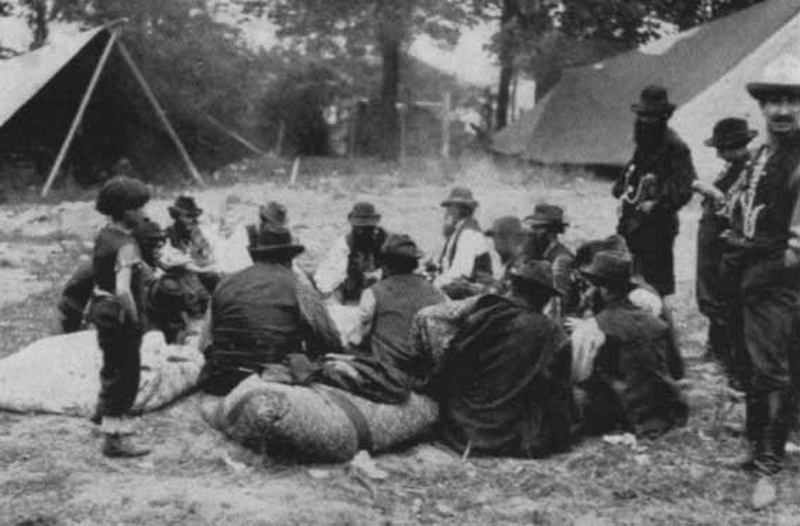 In a dispute between the members of various Roma groups, it is mandatory that the court is mixed. The possibilities of holding such a mixed court, however, is acceptable only to “respectable” groups, i.e. Romani-speaking (ex)nomads; The possibility of holding a mixed court with groups of lower standing who are not considered respectable (i.e. settled groups, and/or groups, who have lost their language) is categorically rejected (often because they are simply unaware of the institution).

The time after the political changes in 1989 in the region saw some changes in the holding of the Roma court, mostly as a result of different factors such as the opening of the borders and establishment and/or re-establishment of contacts between some related Roma groups from different countries and migration to western European countries. In recent years, an increasing number of cases of transnational Roma courts have been summoned in order to make decisions on marriage problems among Roma living in different countries have been reported.

The procedure of carrying out the Roma court in the region of central and eastern Europe is quite similar. The members of a Roma court have to be invited with “due respect”, i.e. their travel costs are covered (including air travel in the Soviet Union) and frequently they are brought in to the hearing by car. They are invited to a sumptuous meal and if necessary, they are provided with accommodation. Initial court expenses are covered by the plaintiff, although at the end usually the guilty party has to cover these costs or part of them as part of the verdict.

There are differences in the region with regard to payment of the judges for their work. In Bulgaria it is called denguba and is regarded as compensation for the days spent for trial. In Romania the term used is vâtrârit and the judges are paid for their decision and the days spent. For Roma groups around the former Soviet Union it is considered to be absolutely inappropriate to pay for the court, only the expenses of judges are covered. In the Czech Republic and Slovakia on the contrary, the money for the court is given and counted publicly by the chair of the trial in the beginning of the process in front of the community.

A court may be held at any appropriate location e.g. a big room in one’s own house, in a courtyard, on a meadow, in a restaurant rented for the purpose, in a specially prepared tent, and in some cases (in Romania and Bulgaria) at a stadium for cases which provoke great community interest. Any member of the Roma group who so wishes may be present at the hearing, including women and children. The proceedings are directed by the most authoritative member of the court, however his standing is as a rule not institutionalised, i.e. he is Primus inter pares.

When the trial starts, both parties present their position, followed by a discussion by the court participants – circumstances are clarified, witnesses are summoned by both parties, etc. In the course of the hearings judges are the ones who most often take the floor, yet anyone present has the right to speak, to give evidence, or back their opinion on the relevant question by citing past examples. Discussions are not limited by time, and especially in difficult cases the hearing may take several days. The main aim is to bring the parties’ positions closer and to allow for a consensus to be reached through mutual compromise. After the judges decide that a common position has been established, they hold consultations, formulate a decision which is acceptable to everyone involved, and then publicly declare it (usually this is done by the most respectable among them).

The decision of the Roma court always involves money – a specified sum (either gold or a foreign currency) which is paid to the aggrieved party or as compensation for an unjust accusation. Decisions are always in line with the financial possibilities of the offender against whom the ruling has been made, and they may be given a certain period of grace for paying the sum. The main purpose of this approach is to guarantee that the poorer members of the community are able to continue to live normally and to develop their own “business” (no matter of what kind) and not to drop out of the community, which would be imminent if they were impoverished and socially marginalised.

The ruling of the Roma court cannot be called into question as this would be seen as contempt of court. In practice, however, the court ruling may be appealed against in all Roma groups in the region, without affecting the authority of the judges. This is done by pointing to procedural grounds such as new circumstances or the appearance of new witnesses, which may require another hearing. At the second hearing, the judges who are invited are usually new and there are usually more people of greater authority present. A third hearing of one and the same case is also possible, however this is not socially acceptable – a pronouncement by such a large number of people with authority has to be respected. Although there is no clearly stated rule forbidding it, there have not been any cases of more than three hearings. Generally, appeals against a decision of the court are more frequent among Roma in Bulgaria, Romania, less so in Hungary, the Czech Republic and Slovakia, while in the former Soviet Union this is rather the exception.

The source of information http://romafacts.uni-graz.at/index.php/culture/culture-2/the-roma-court