«Vardo» – How did it Resemble the Romani Caravans? (The story of the Roma) 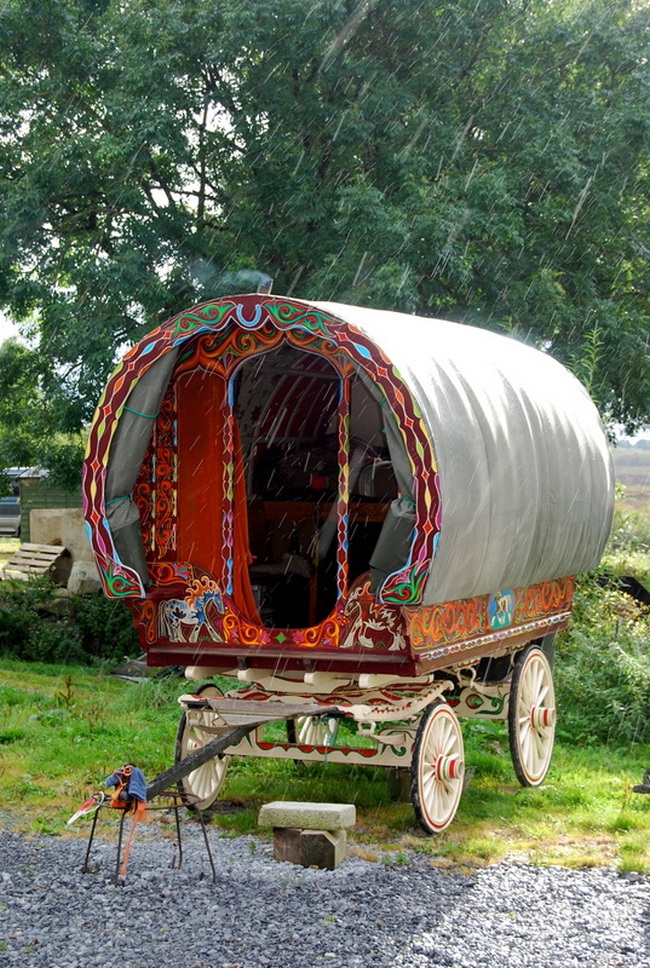 By the mid-19th century, the Roma were living in tents, because they mainly led a nomadic life, moving from place to place. These nomadic structures were identical to modern dome tents. Roma used the curved “spear” as the basic foundation of these tents. The lance was bent in the form of an arch and the ends of it were driven into the ground. The individual peaks that are not bent, were joined as a semicircle. This framework was covered with a cloth that was durable against weather.

Vardo (from Iranian «vurdon» – wagon) actually evolved from these kind of tents. Vardo, wagon, van or caravan are the traditional ways of transportation (using horse traction), which was used by Roma in history.

In the late 17th century, most European roads were paved. It is believed that the first living wagons appeared in France, and were built for the actors and actresses of the circus. They were large, horse-drawn vans. By the mid-18th century, such carriages became smaller and only needed to be drawn by one or two horses.

Roma caravans appeared in the 1850s, and were built comfortably for the nomadic lifestyle. A typical caravan looked like a four-wheel chasis that was “pushed” by the horse. Usually, this trailer had a standard construction: on the right – mirror and stove, opposite the dresser and directly nearby was the bed. This type of house was built of wood (oak, pine, walnut, ash) during the time frame of 6-12 months. After that, it was decorated with carvings, paintings and ornaments. 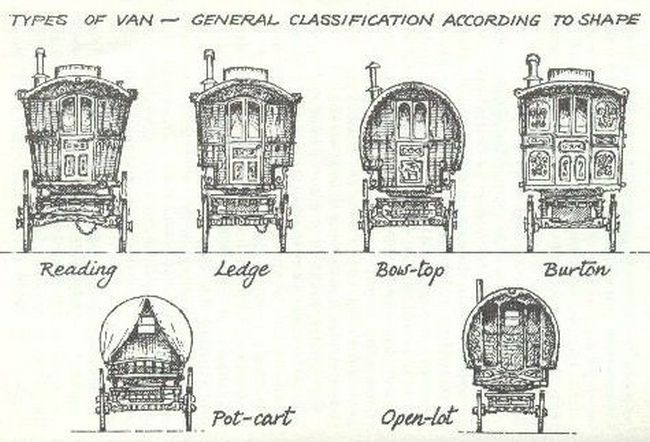 There are different typologies of vans, but mostly are the following types:
• The Burton Wagon
• Reading Wagon
• Brush Wagon
• Ledge Wagon
• Open trailers (The Bow-top Wagon and Open lot Wagon)

Roma caravans evolved from the Burton wagon, which was used by actors and actresses of the circus in the middle of the 19th century. In general, these two types of caravans are not very different. The only thing, that circus wagons have small wheels as opposed to Roma vans, which were equipped with larger wheels. This was necessary because Romani trailers had to travel not only on a paved road, but also across the fields. 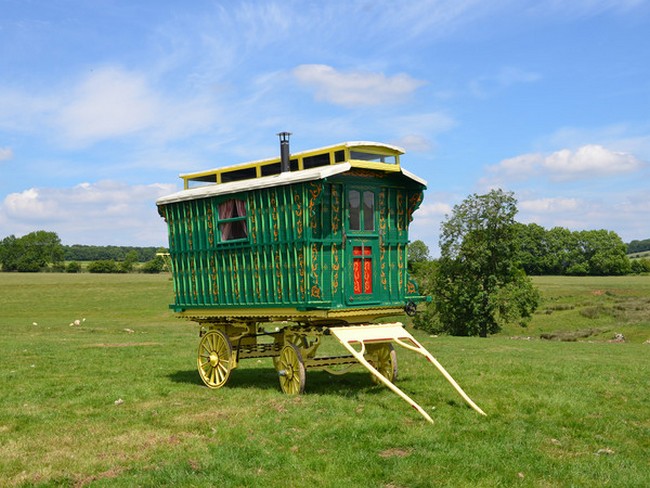 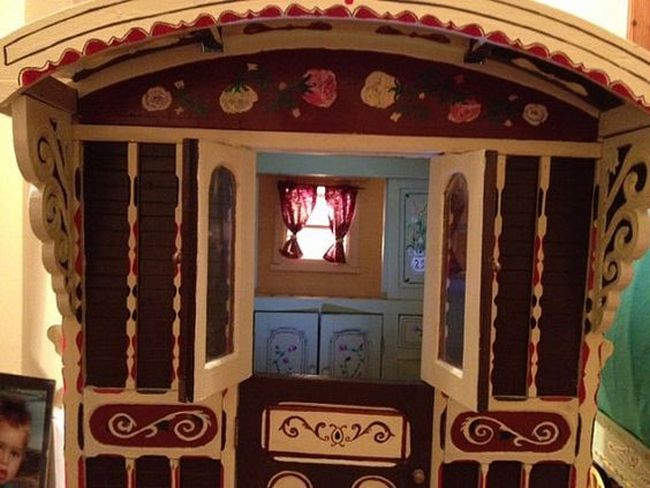 This type of trailer was from 1870, and it’s name is derived from the family that built them in England. This wagon is made of wood and windows accommodated on three sides, except the front. All the walls were slanted, and slanted in an upward direction. The front wheels were smaller than the rear. Externally, the trailer was decorated using beads that were laid out in a linear fashion. The style of decoration depended on how wealthy the family was who owned the van. In the middle of the wagon were generously decorated mirrors, cabinets and beds that were protected from vibrations while driving.

Now, those vans have been preserved in musesum collections or in private collections. 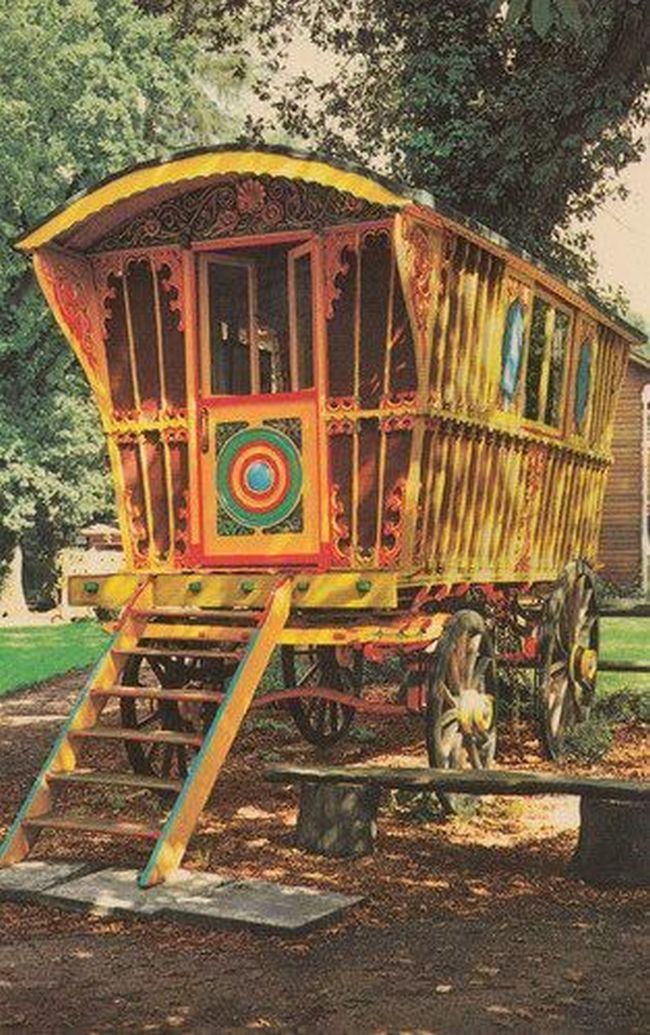 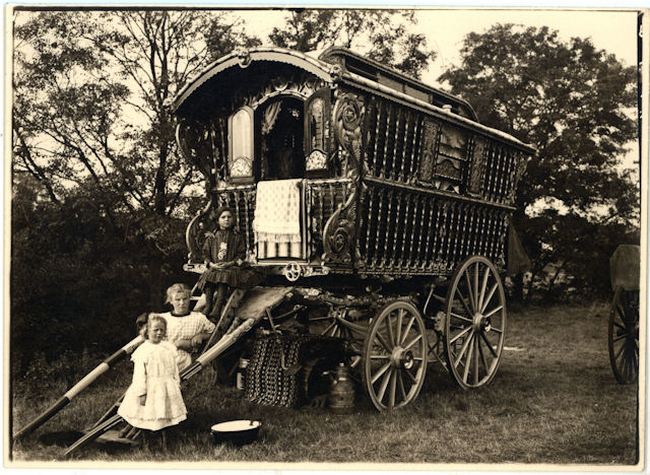 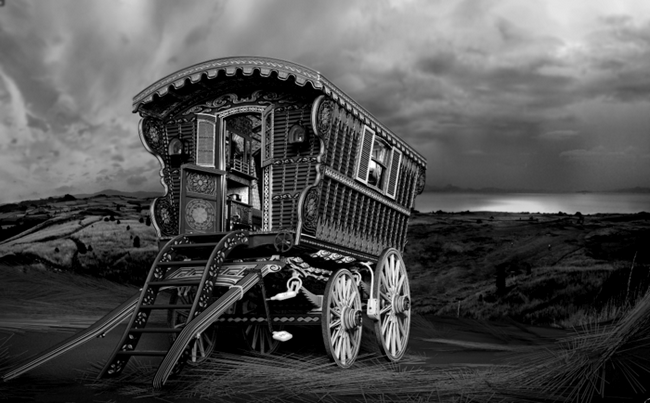 This type of wagon is a typical trailer for Roma and has straight walls with wheels on the front part of the “body” of the nomadic housing. This type is similar to the previous type of van, but only has two features: the door is on the rear side of the trailer and it is half-glazed; and, stairs are not in the front, but on rear of the trailer.

The name of this type of wagon comes from the fact that there were a lot of boxes on its rear, where brushes, brooms, and baskets were kept for the owner to sell. These trailers were colorfully decorated. 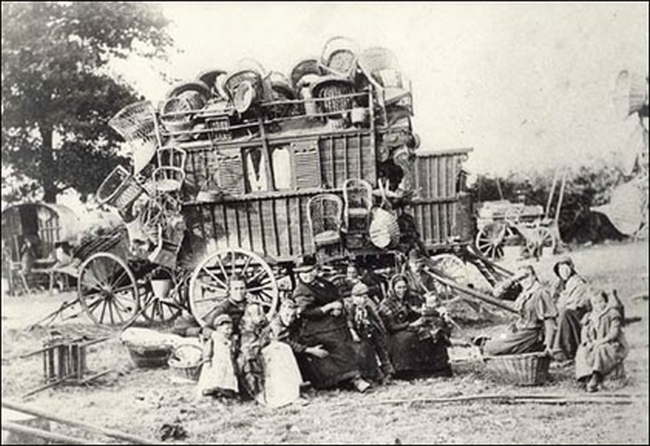 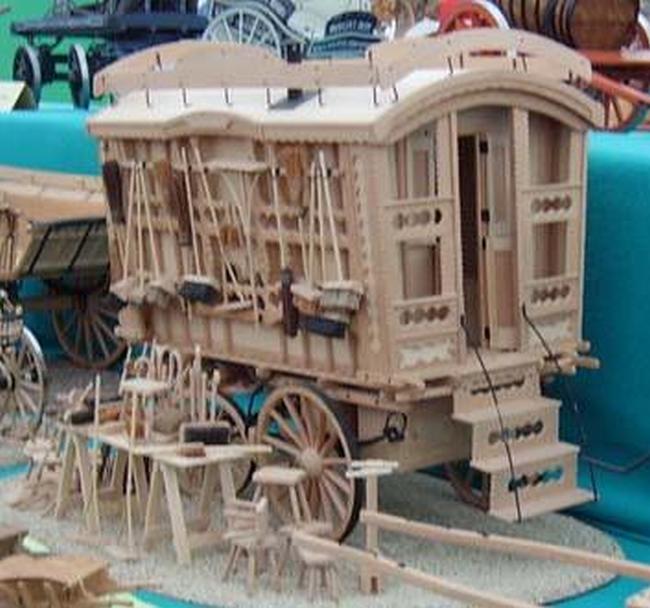 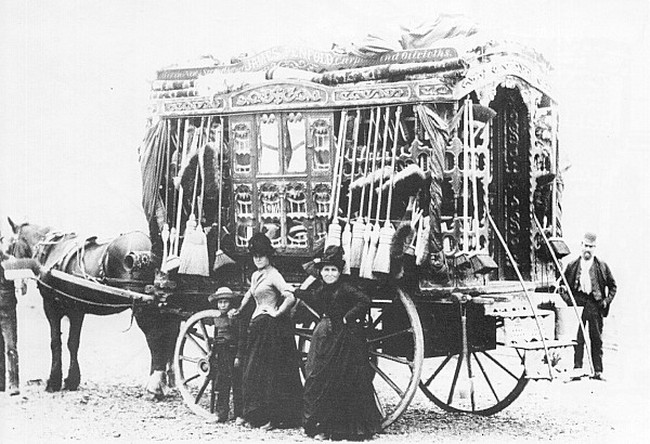 This trailer is similar to the Reading van, however, there are only two sides bent upward. A characteristic feature of this type of wagon has a more stable (usually brass) frame in the form of an arch with large rear wheels. Here, the entrances are on both sides. The roof of the porch is kept on iron spears. The walls are decorated with carvings and various types of ornaments, and sometimes with gold patterns. 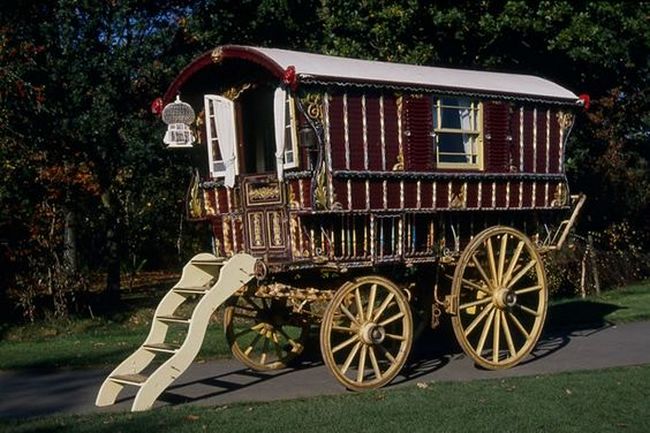 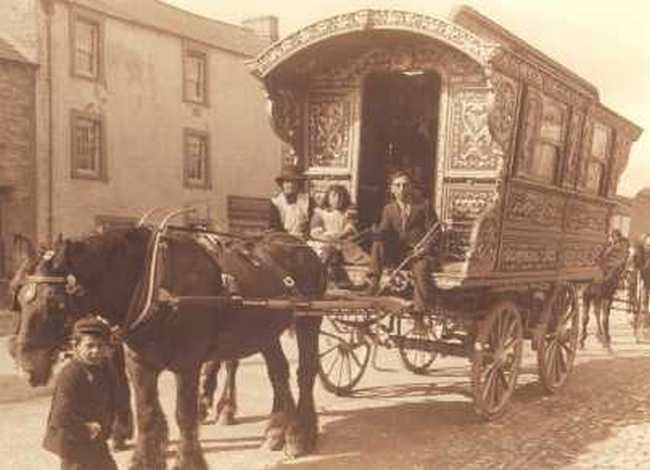 The Bow-top Wagon has a similar structure to the previous type vans. However, it has a number of distinguishing features: the frame is a wooden (and therefore lighter) and covered with cloth, which protects against weather adversities. It differs only by the existence of the rear window. 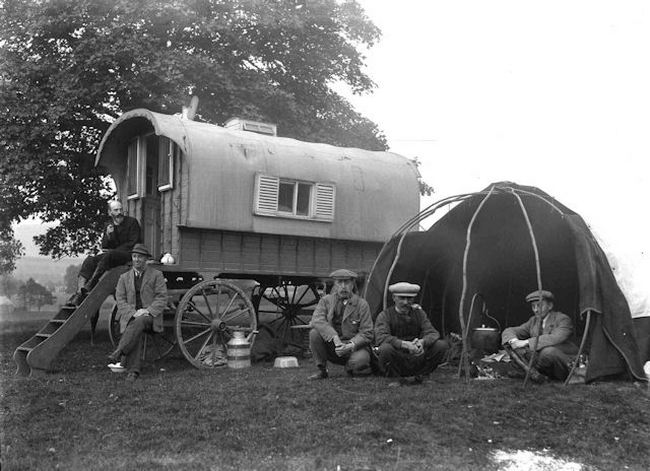 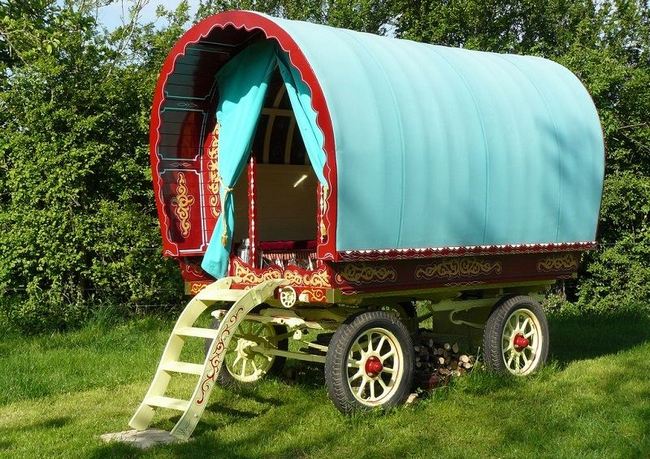 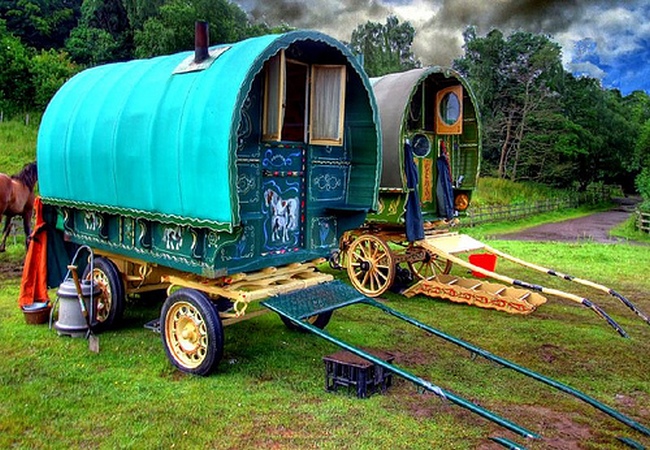 According to various sources, whether in the late 19th century or in the 1930s, another type of Roma wagon was created – the Open lot Wagon or Yorkshire Bow – which was easier and cheaper to build. Such a wagon did not have a front door. The entrance was in the form of a porch roof which was supported by two columns. Furthermore, the entrance was not a door, but a dense cloth. 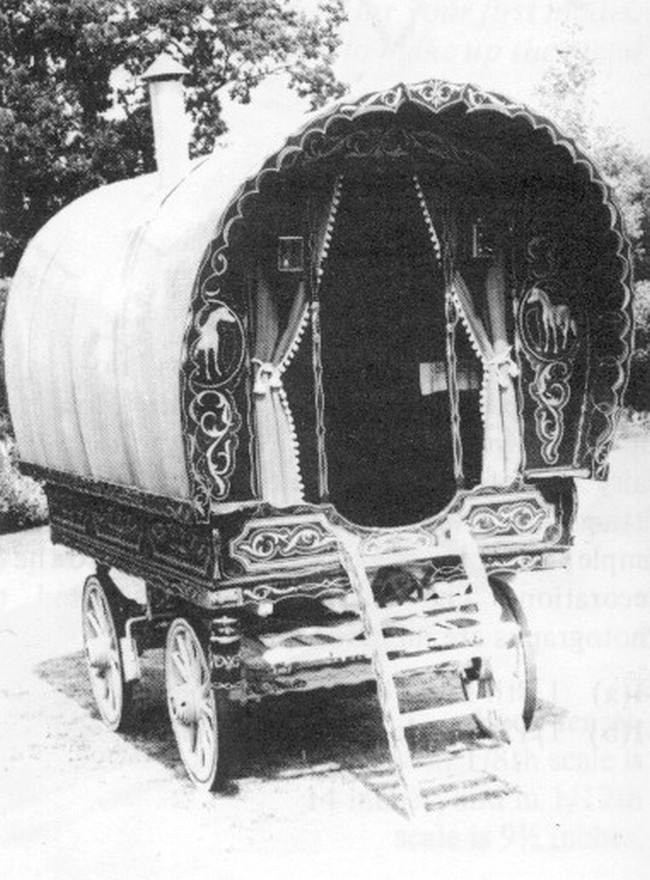 Despite the interesting structure of Roma caravans, they still warranted decorations. The greatest value in this sense, became the thread procedure, painting and gilding that the Roma used.

Horses, lions, or griffins were place near bunches of grapes, or bunches of sunflowers – there were the most common motifs in the designs. However, all designs depended on the personality and the richness of the owner of the trailer.

The main colors for the Burton Wagon were yellow; crimson and gold for the Reading and Ledge Wagons; and, green for Bow tops vans. Although, various combinations of colors could be found on all types of vans. 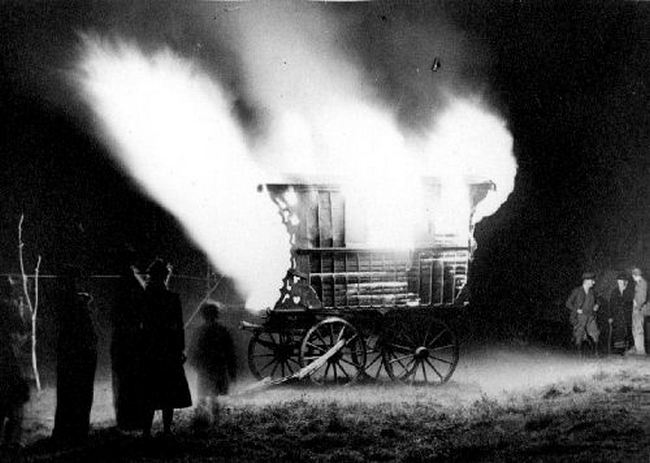 Roma started their married life with the purchase of a van as an important component of their lives. The caravan was regarded as the most valuable possession of Romani women. Husbands usually slept in a tent. The interior of the van was the women’s domain.

Whenever the Roma found a suitable place for temporary camps, the wise woman went around to all neighborhoods with a ceremonial broom to disperse all evil spirits. They would also prepare a meal, usually on the street near the van.

Additionally, this van “takes” part in funeral processions. After the death of the owners, the van usually burned.

Materials that were used:
1. Timothy Lemke. The new gypsy caravan
2. The Romany Vardo of the English Gypsies
3. History of the Vardo